You are here: Home / About Chef David 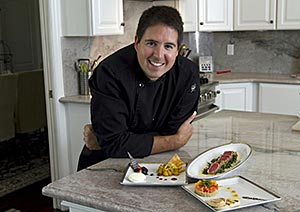 Chef David developed a great interest in cooking from a young age, creating twists on his family’s multicultural recipes.  In fact, some of David’s earliest and fondest childhood memories include helping his Mexican grandmother in the kitchen as she prepared meals.

As a teenager, David’s first break in the culinary industry came when he was hired as a dishwasher in a very busy Chinese restaurant.  Although a physically demanding experience, David found himself fascinated as he watched the cooks’ performance.  David was soon accepted to culinary school in Farmington Hills, Michigan, and in 2002, he graduated with honors both on the Dean’s List and as the class sous chef.

David’s first professional cooking job was at a restaurant/bar in Michigan, where he quickly gained experience and was promoted to head Chef within the first year.  Making it his business to understand the entire operation, David worked in every role of the restaurant to fully understand the industry from inside-and-out.  He also honed his cooking skills studying style and technique in French, Middle Eastern and Japanese-inspired restaurants in the area.

After several years in Michigan, David was presented with an opportunity to move to Florida, which opened up a new world of tropical flavors and ingredients.  He accepted a Sous chef position at a country club with the prestigious Bonita Bay Group, and was soon promoted to an Executive chef position.

Although David enjoyed his seven years in the country club world, he realized the most professional fulfillment providing inspired creations for friends and family’s private parties and functions.  At each event, guests highly praised David’s cuisine, with so many requests for his services at their own events that David decided to open his own business as a personal chef.  Before long, David had his first regular clients, a family and business in Naples for whom he spent over two years preparing daily lunch, dinner, and frequent private parties.

Having built up his experience and client base, David made the decision to enter into the private chef business full-time, and is now available to take on new clients.  Please consider allowing Chef David Hill and his professional staff to make your next meal one to remember.